When using cpkg, I get better time-performance via hashes/caching, however, memory use seems unreasonably high. 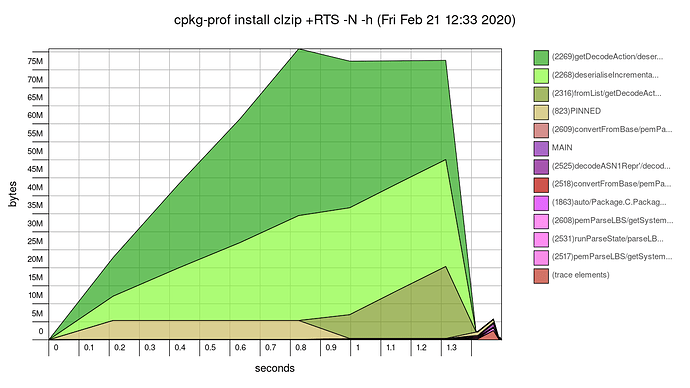 This deserializes the cache for pkg-set.dhall, right?

While I could be wrong, 75MB heap honestly doesn’t seem all that big to me. The binary cache file alone is 4.8MB already. Remember that it’s normalized, so it contains a lot of redundancies.

Fair enough; I’d have to dig deeper and look at how long it “should” take to decode. The “source” is a few hundred kilobytes.

(As an aside, it might be cool caching compressed with lz4 or zstd or something…)

@vmchale: I made an attempt to improve encoding/decoding performance recently and right now the bottleneck appears to be in the cborg package.

There is also the possibility of not storing αβ-normalized forms. One idea I floated was providing a cache option for integrity checks that stores them without normalization and ignores hash mismatches:

Issue: Remove caching from Prelude while cached imports are α-normalized

In other words, something that reifies within the language what the --cache flag to dhall freeze currently does.